Warner Music Japan
#TWICE is the debut Japanese special album from Twice. The album has released on June 28, 2017. Twice's first self-titled Japan album comes with ten tracks including both the original and Japanese versions of all 5 korean chart-sweeping hits from "Like Ooh-Ahh," to "Signal". There are three versions: Limited Edition A, B, and Normal version. The two tracks "Signal" and "TT" are the leading tracks for Japan debut, as both are getting their own music videos

On June 14, 2017, Twice was announced that the group would have a collaboration with Shibuya 109 store's 109 Summer Sale campaign for 2017 to mark the album release of #TWICE. The store will host pop-up stores called #Twice Pop-up Store and #Twice Gallery at its Tokyo and Osaka branches throughout July. They also launched a promotion campaign with Tokyo Tower. On June 29–30, letters "TT", which represent the title track, were displayed in bright pink lighting on the Japanese tourist destination.

Twice appeared on many TV shows including Mezamashi TV, and Nippon TV. Twice also performed "TT (Japanese ver.)" for the first time on a television program on the June 30th episode of Music Station, the first South Korean girl group to perform on the show since 2012. They appeared on the 2 hour special episode along with Exile The Second, Kanjani8, Keyakizaka46, Dean Fujioka, Tomoyo Harada and Hey! Say! JUMP. 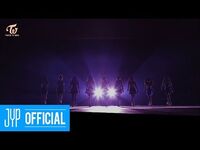