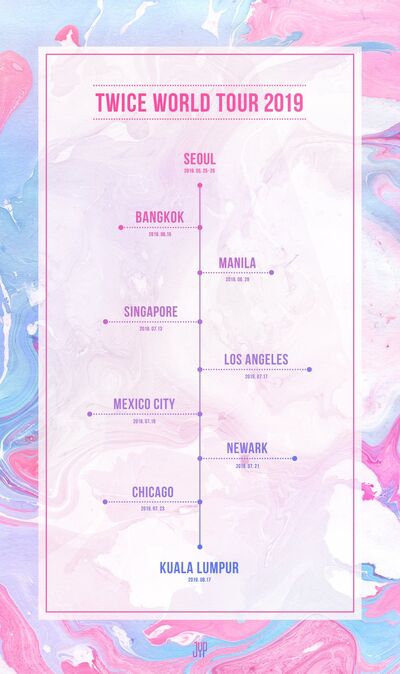 For the special performances in Twice World Tour 2019, Twice members were split into 3 teams in performing 1 song each:

On 19 August 2019, Billboard revealed that JYP Entertainment and YouTube have partnered to produce a YouTube Originals docu-series starring Twice, based around the North American leg of the tour. The series promises exclusives, in-depth interviews and analyses, as well as an "intimate and personal portrayal of all of TWICE's members." Viewers will also get a look into the group's four-year journey and how they've risen to become a new leader in K-pop with No. 1s across Billboard's World Albums and World Digital Song Sales charts. The series is currently in production and will be released in the first half of 2020. A teaser for the series was uploaded to Twice's official YouTube channel on 20 August at midnight. The first teaser video was uploaded on 9 April 2020, revealing that the series would be called Seize the Light with the first episode releasing on 29 April 2020. New episodes will be uploaded every Wednesday.

Retrieved from "https://twice.fandom.com/wiki/Twice_World_Tour_2019?oldid=43537"
Community content is available under CC-BY-SA unless otherwise noted.