Wake Me Up
Wake Me Up is the third Japanese single from Twice, released on May 16, 2018. It comes with two tracks "Wake Me Up" and "Pink Lemonade". Four versions are available: Limited edition A, B, normal version and Japan "Once" limited version. The title track ''Wake Me Up'' is also used for the background music of Twice's endorsement TV commercial "NIKE AIR MAX".

On April 1, 2018, Twice announced the release of their third Japanese single titled "Wake Me Up", along with the news that Twice would appear in a television commercial for ABC-Mart and Nike Air Max. The commercial, featuring "Wake Me Up", began airing nationwide in Japan on April 5. The full song was first revealed on Tokyo FM's School of Lock! on April 24 and it was pre-released as a digital single on various online music portals the next day. The full music video was also released online on April 25.

The CD single debuted atop the daily ranking of Oricon Singles Chart with 129,275 units sold on its release day, breaking Twice's record of the highest first day sales for Korean girl groups in Japan. It topped the weekly Oricon Singles Chart with 262,658 copies sold, while Billboard Japan recorded 299,195 unit sales from May 14–20, 2018. This is Twice's third consecutive release to surpass 200,000 sales in its first week, making the group the first foreign artist in Japan to achieve this. 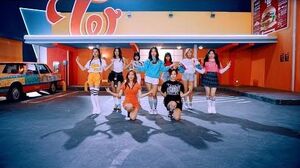 Retrieved from "https://twice.fandom.com/wiki/Wake_Me_Up_(Single)?oldid=52136"
Community content is available under CC-BY-SA unless otherwise noted.